Who Would Find This Article Most Helpful

Things I am Currently Trying

How I Procrastinate on Sleep

I procrastinate on going to sleep in a wide variety of seemingly unrelated ways: 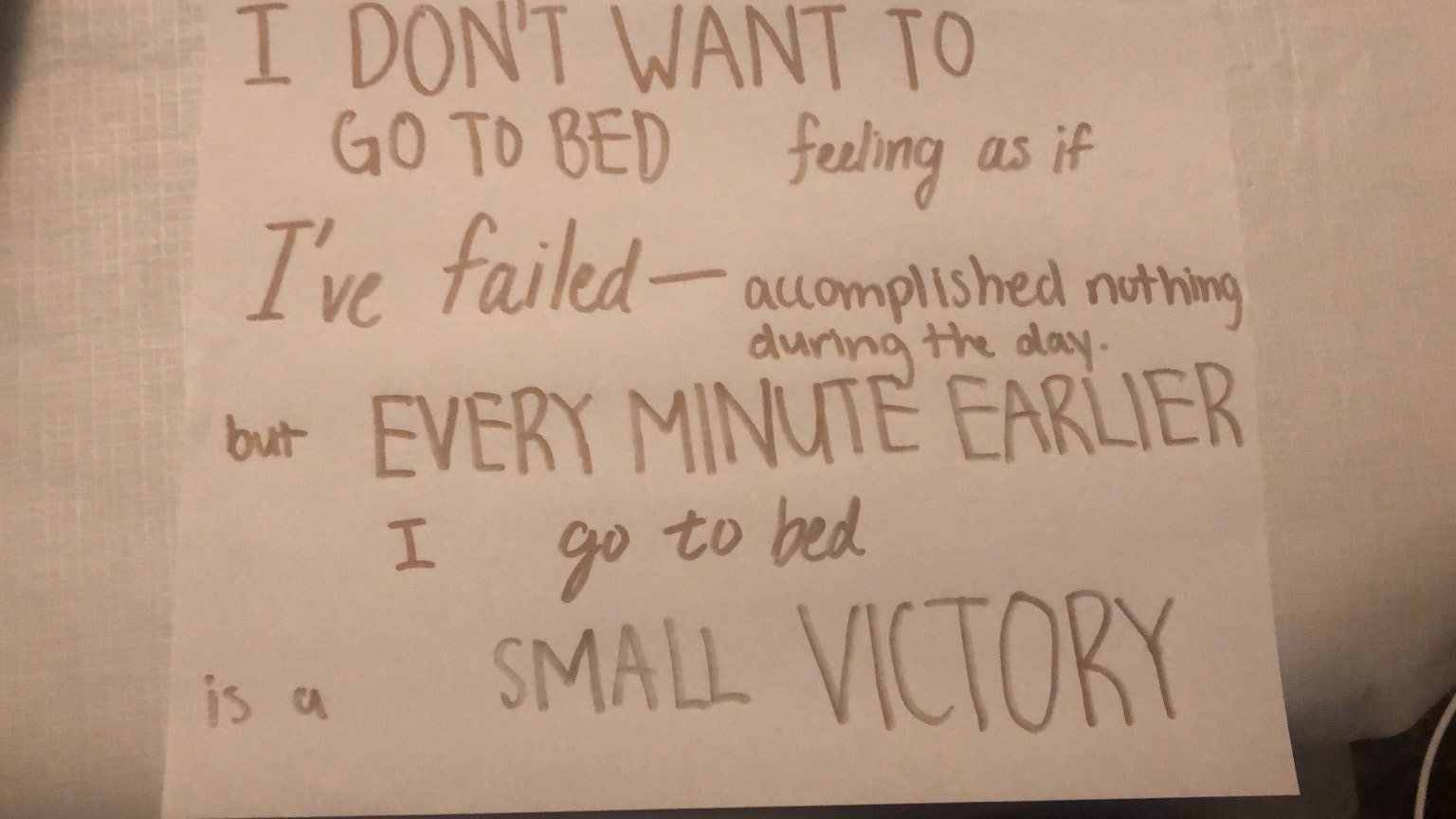 Given that a lot of these interventions didn’t work, I hypothesize that shifting my mindset about sleep—even though I know it is quite important—is probably necessary to ensure that my system of tools actually works.

Why Sleep is Hard & Making the Mindset Shift

1. Staying Up May (Sometimes) Be the Optimal Choice

There are times when we do not regret staying up late. In fact, in the short-run, staying up late may well be the optimal decision. Here are some examples:

The general theme is that there is a hard deadline that one has to meet and that it would be much better in the short run to meet it than to get the extra dose of sleep.1 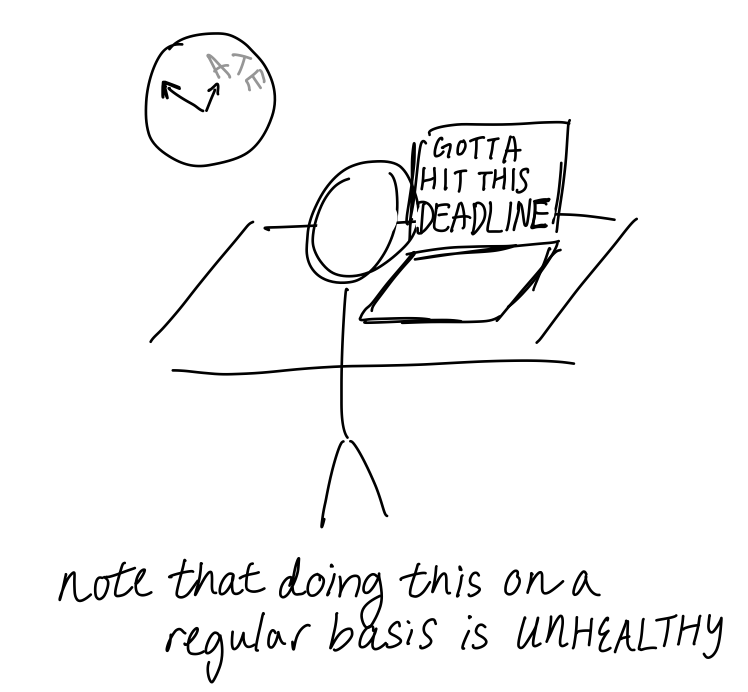 We might extrapolate from the experiences where staying up later would be the optimal choice and assume that we should stay up late to be more productive and get more done. However, forgoing sleep could be thought of as a high-interest loan.2 You’re likely to be less effective and feel awful the next day. In addition, it takes roughly 4 days to recover 1 hour of sleep debt in terms of performing at the optional level.

2. Variability in How We Feel the Next Day

Maybe sometimes you stayed up late and did something productive, and when you woke up the next day you didn’t feel that bad. 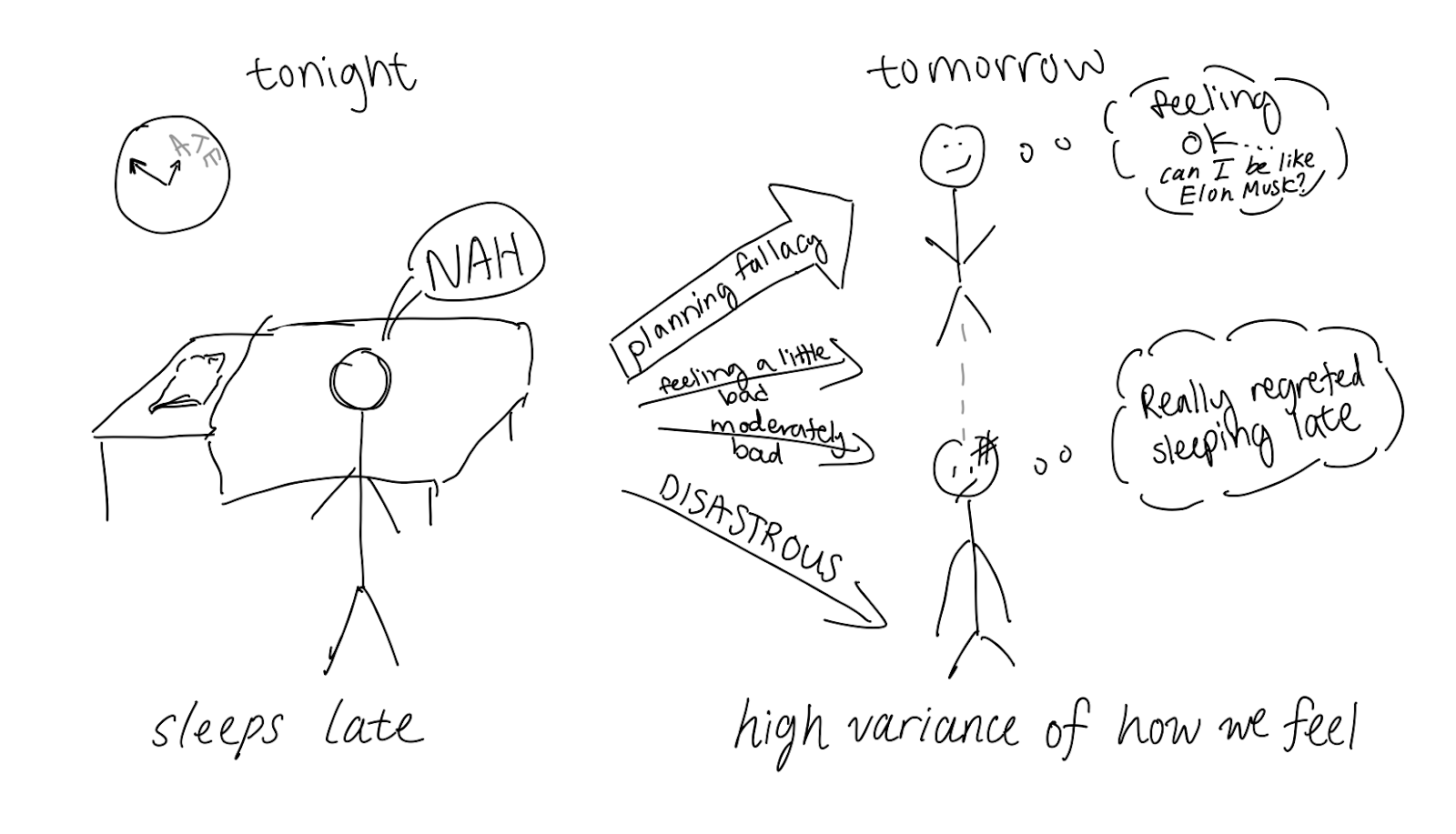 With planning fallacy, you think that you’d end up ok tomorrow even if you sleep late tonight when that is not always the case.

Our careers span decades. Maybe being sleep deprived for a few years can work out, but this is unsustainable in the long run. Steve Jobs died young. Nikola Tesla wrote love letters to his pigeon. Elon Musk’s tweets suggest that he may not be thinking clearly. Meanwhile, Jeff Bezos gets a full 8 hours.

In addition, correlation does not imply causation, and we cannot extrapolate from the habits of successful people due to survivorship bias; there are many people who have slept little but were not successful. Numerous studies suggest that more sleep increases productivity and sleep deprivation is a major risk factor in terms of developing burnout.

4. Wanting To Accomplish Something 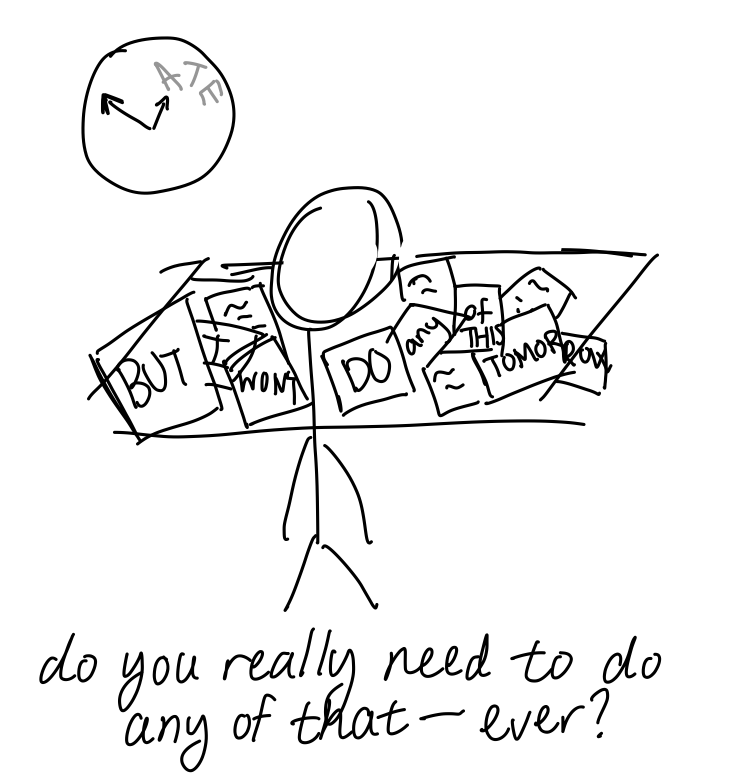 If you don’t do X tonight, you don’t think you’ll ever do X. Or perhaps you feel like you haven’t been productive for the rest of the day and have an urge to stay up late to catch up on some work.

Is doing X more important than getting enough sleep? Does doing X even matter at all? If it was actually that important would I really never do it? Is it possible that you were unproductive during the day because you were sleep deprived?

Recall that numerous studies suggest that sleep increases productivity and decreases the risk of burnout.

If you probably won’t fall asleep anyway, might as well go to bed later.

I’ve definitely experienced a lot of insomnia. I have plenty of recollections of being awake at 5am when I went to bed at a much more reasonable time. There are many great articles on how to fall asleep more easily. Personally, I found that wearing these blue / green blocking glasses3 a couple of hours before sleeping (still experimenting with exact timing) and taking magnesium glycinate supplements4 right before bed is a very low effort way to mostly get rid of my insomnia, though this may or may not work for you.5

1. Reading Why We Sleep6

Realizing that sleep is the foundation for optimal performance and good health (ability to eat healthy and desire to exercise are both impacted) has led me to write this post and want to prioritize sleep. An easy way to do this is listening to an audiobook while going on walks or doing chores like cooking.

I realize that there are many critiques on this book, but if you know that your sleep deprivation is actively harming you, which it was in my case, reading it is a net positive. Sometimes seeking out something helpful or useful in the short run may mean sacrificing a little bit of truth. This is sometimes ok.

As someone who cares a lot about my productivity, having a rough number for how much less productive I will be if I were sleep deprived could be a useful exercise so I don’t fall into a planning fallacy of believing that the next day could be productive.

Note that these are extremely rough estimates. If you know of better estimates than I use here, please leave a comment and I can update these very rough calculations.

25% of the time when I am sleep deprived

50% of the time when I am sleep deprived

10% of the time when I am sleep deprived

Therefore, the expected value estimate is that I will be losing 0.25*4.9 + 0.50*2.1 + 0.10*0.4 = 2.315 hours from a lack of sleep a day. My guess is that this is likely to be an underestimate because it doesn’t take into account poor decisions being made (choosing to prioritize task B over task A), the increased likelihood of falling sick if you are sleep deprived, and the increased likelihood of burning out for an indefinite amount of time, and the fact that it takes around 4 days to make up for the lack of sleep. These estimates also do not account for the likely decrease in lifespan that may occur due to a chronic lack of sleep.

That being said, productivity is not the only thing that suffers from the lack of sleep. It also impacts your subjective well-being, desire to exercise, ability to moderate your eating, social interactions, and more. 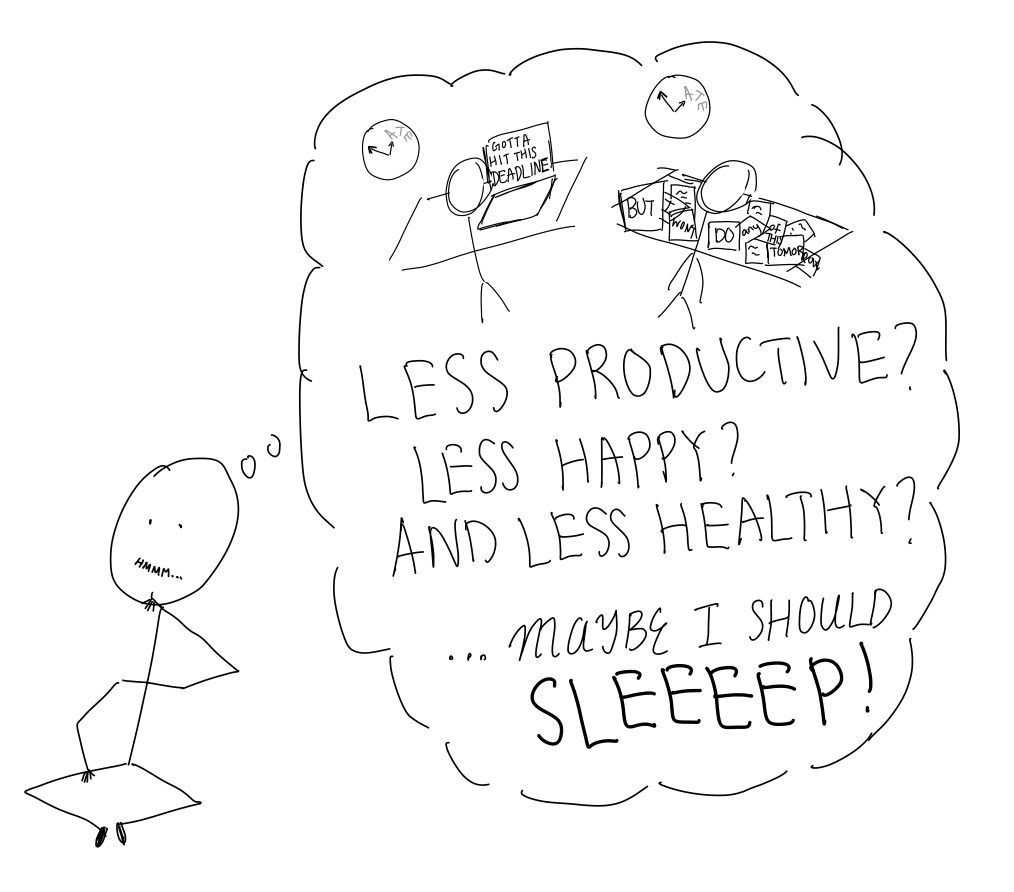 While I generally have an intuitive idea of why I fail to go to sleep early enough, explicitly listing out the failure modes leads to more concrete and effective targeting mechanisms.

Surprisingly, it worked. This is probably because 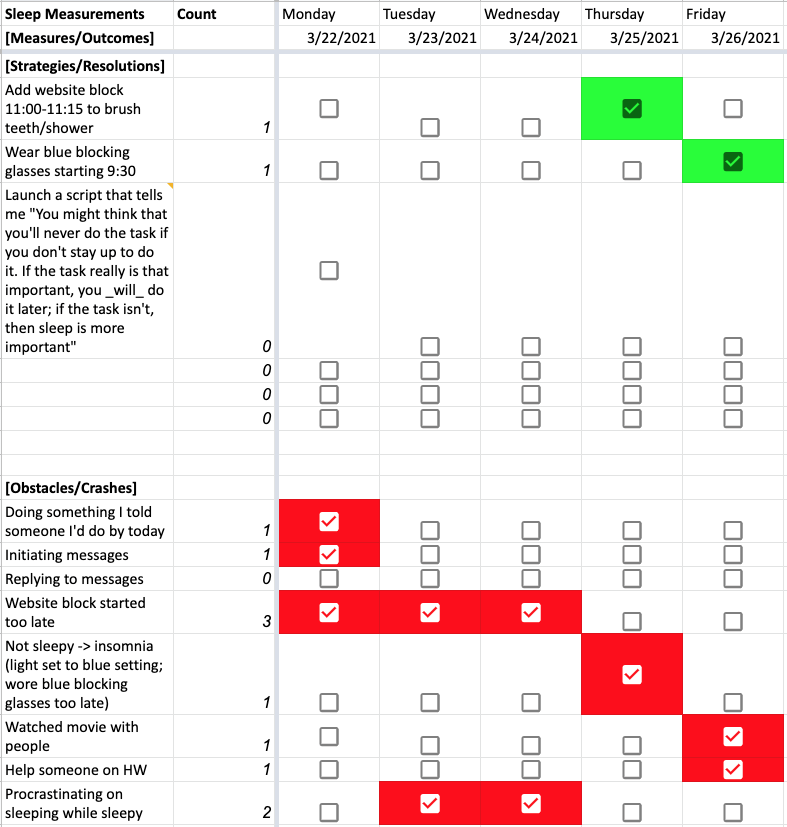 Here is the link to a template for this spreadsheet.

I’ve been doing this consistently for a couple weeks already. I use Tab Snooze to automatically open up the tab every morning (recurring tab openings show up as a pro feature but I haven’t paid for it and it still works for me).

A copy and paste of the TLDR

Things I am Currently Trying

I appreciate Sydney Von Arx, Constantin, Chris Lakin, Raj Thimmiah, Talya, Kevin, Hawk, Ti Guo, Alan Taylor, Tony, and Aaron Gertler for reviewing a draft of this post and providing feedback. I take responsibility for all errors in this document.

I am also grateful for everyone who has nudged me towards prioritizing sleep and sharing strategies on how to do so. I definitely feel better with a more stable sleep schedule.

Some of my most interesting and life-changing conversations and insights come from talking to other people. Even if you don’t feel like you have anything to say, you probably have something interesting to share. All of us come from different backgrounds, so something that is obvious to you may have been overlooked by me.

What does this mean? 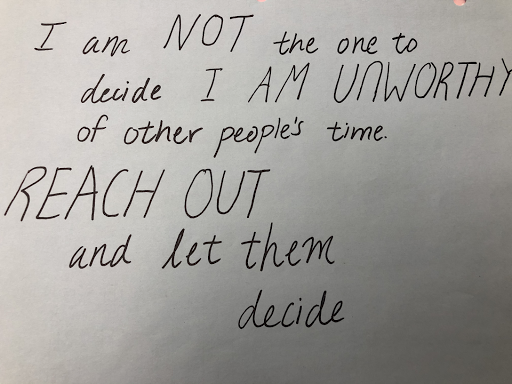 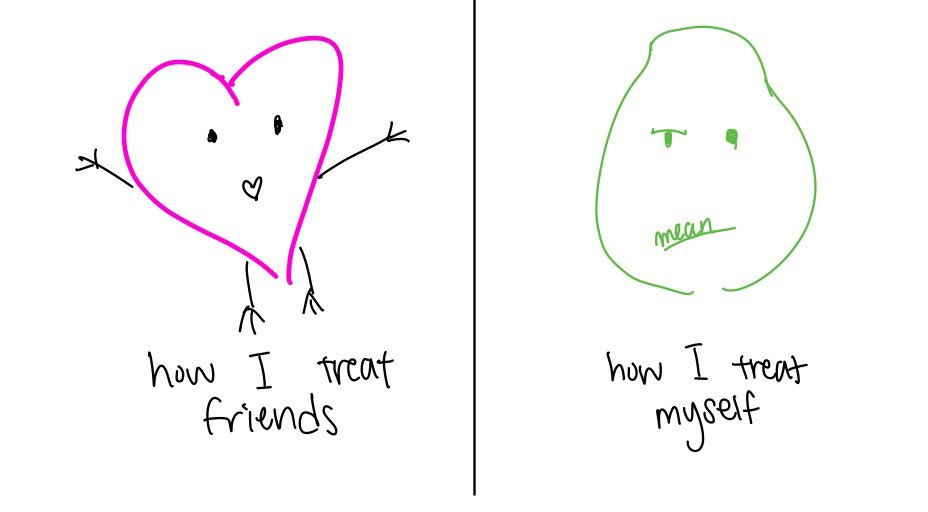 Why might we be so mean to ourselves? I like to think that I am accepting and forgiving of others , and that I make an effort to understand the challenges others face, yet my own inner critic is quite harsh. It seems to be a common experience, but why do we engage in such self-sabotage? My hypothesis is that my inner critic is driven by how I feel about how society judges me.   I see people be mean to each other on social media. I recall my parents’ harsh reprimandings in their attempts to make me a better person. I hear gossip. I falsely believed that the unkind statements, perhaps made by the person while they were in a bad mood, were how society was judging me. I was afraid of being “a bad person,” “lazy,” or the countless negative things others said. I believed that what others said about me was the scale that I would be weighed on. I was afraid that I wouldn’t be accepted by society. Having been socially awkward and lonely for a large chunk of my life, the inner critic perhaps
Read more 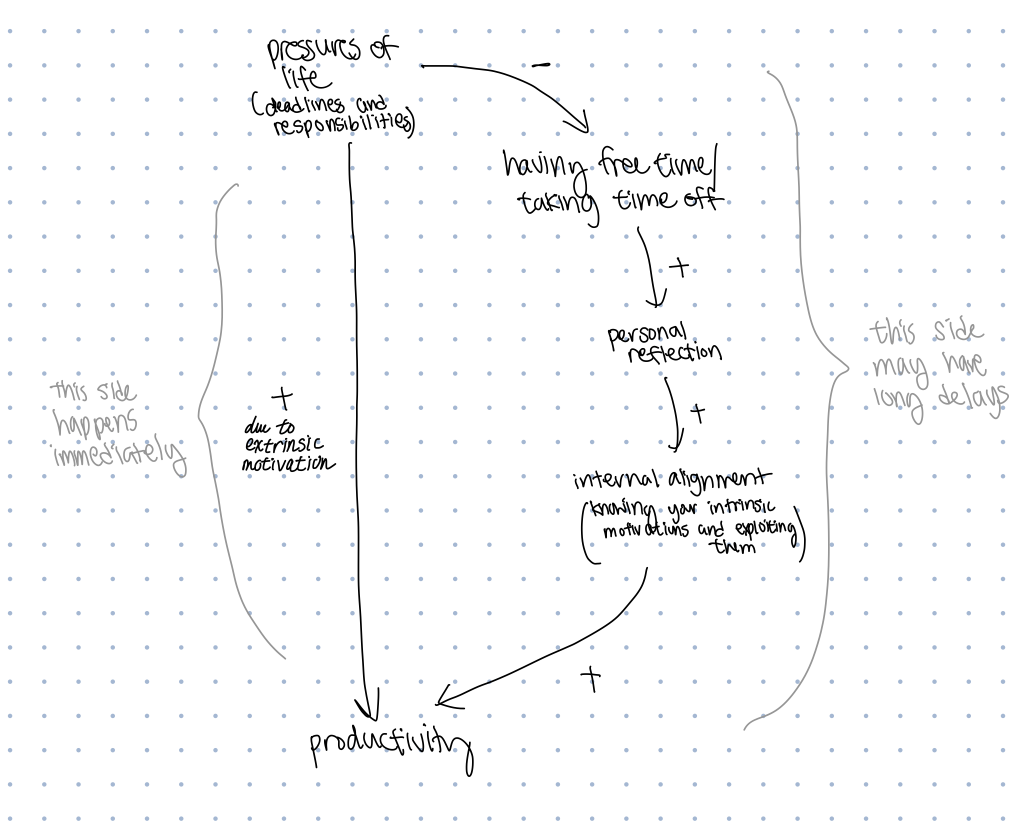